I’m embarrassed to admit I recently added the Brother 1034DX serger to my sewing room so I could save time by keeping my Brother 1034D serger threaded with black thread and the new Brother 1034DX with white thread.

Upon opening the Brother 1034DX box, I had been led to believe only a few differences existed between the two machines–mainly the stitch control placements.

However, there are MANY more differences.

Why? Let me give you a picture tour of the similarities and differences between these two popular Brother sergers so you can see it all yourself.

Let’s gloss over this similarities section before heading to the more significant differences.

Both sergers stitch up to 1,300 stitches per minute and are controlled with identical foot pedals. 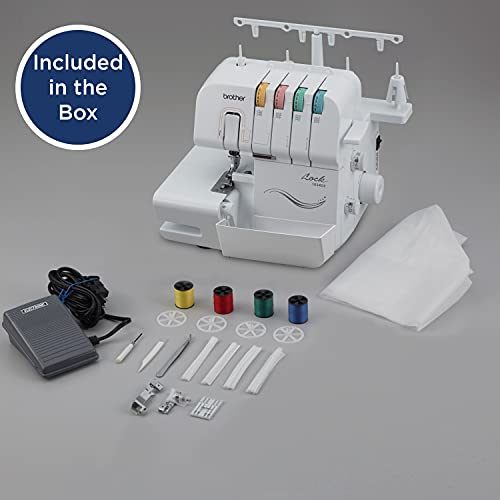 Identical accessories are included with both machines, which also use the same type of needles and presser feet.

Of course, you will need to purchase a few additional serger supplies before getting started, like oil.

I also really like my elastic serger foot, which I purchased separately.

Once you master the somewhat steep initial learning curve, both sergers are easy to use and tolerable to thread.

However, both manuals stink, so I read many books to learn and recommend these serger books for beginners. Still, I recommend reading the manual from front to back before starting to serge!

While the Brother 1034DX manual includes more information and is easier to understand, I think it could use more information for true beginners. (It also has a DVD, but I wasn’t a huge fan of that either.)

Even with the correct needle and settings, neither machine effortlessly masters more than two layers of thick denim or fleece. It’s no fun to try to disengage a mess of thick, jammed fabric.

I recommend the Brother ST4031HD serger, which is intended for heavy-duty sewing, if you plan to push the limits of your machine regularly.

Now, I’ll include many pictures of the two sergers to showcase their differences!

Even though the Brother 1034DX weighs more, though, it is easier to carry because there’s a grip on the front left of the machine.

The Brother 1034D above has the differential feed, stitch width, and stitch length levers on the machine’s left side.

These “levers” make loud grating sounds and are not all that easy to move accurately.

For the Brother 1034DX, the differential feed and stitch length are on the right side of the machine. The stitch width knob is in front of the throat, as shown below.

In contrast to the levers on the Brother 1034D, the knobs on the 1034DX are VERY easy to turn accurately and are an improvement!

I prefer having the controls on the right side of the machine where I can see them better. However, it took time to develop muscle memory for the handwheel location amidst the three knobs on that side. (On the Brother 1034D, the handwheel is the only knob on the right side, which is helpful if you blindly reach for it frequently.)

While both lights function adequately for my tasks (I have great vision and don’t sew in low light), they are VERY different.

When you remove the flatbed attachment on the left of either machine, you reveal a free arm, which is helpful for serging small, tubular projects.

My coverstitch doesn’t have a free arm, so I’ve gotten used to not using this feature on my sergers either for the most part.

Since I despised changing threads before purchasing a second serger, I often didn’t and procrastinated contrasting colored projects.

With infrequent threading, I had to write the threading order on my Brother 1034D in permanent marker! It’s not intuitive as you have to thread the upper looper before the lower looper (see the numbers above).

Now, on the Brother 1034DX, the threading order is more intuitive. You thread the lower looper before the upper looper, which means you thread from right to left. No need to mark on here to help me remember!

Thankfully, once you get the threading order down, further instructions are color-coded and visible on both machines.

At the top of the poll, the Brother 1034D has only one circle to pass threads through.

Often, when I reextend the poll top from its depressed state (which is how the poll has to fit in a dust cover), the threads curl around the poll. If I don’t realize this before starting to stitch, my thread will break and I am sad because I have to rethread.

The Brother 1034D has a hook AND a hole, which has kept my thread from tangling as much. It’s one extra step in the threading process remembering the direction you thread the hook, but this has decreased oversight errors on my part. Even when rethreading by knotting on the Brother 1034D, my knots would occasionally get stuck at the first small, metal thread guides, causing them to break. I would then have to rethread the whole stinking machine.

Instead of metal thread guides, the Brother 1034DX has big plastic holes. Let me tell you, no thread knots get caught in those! (Instead, they get caught later on.)

Also, if you notice, there are no thread tension release buttons on the Brother 1034DX, which makes threading easier as well!

There are also subtle differences in the thread paths of the Brother 1034DX vs. 1034D. Neither is better or easier, in my opinion.

As shown above, step 9 of threading the Brother 1034D involves sliding the appropriate looper piece out using a plastic slider.

Meanwhile, this same step is accomplished by switching a lever on the Brother 1034DX, as shown above.

You have to use a lever on the Brother 1034D’s left side to release the knife to the lower position.

In contrast, to release the blade on the Brother 1034DX, you open the front panel and flip a plastic piece.

Both are easy enough, and I don’t have a preference here. In contrast, on the Brother 1034DX, the presser foot pressure knob has numbers on it, so you know what to put it back to once you’ve finished with each project!

See this sorcery above on the Brother 1034DX?!

There are holders for tweezers, needles, screwdriver, and stitch finger inside the front cover! To help figure out what goes where there are even very slight impressions of the tool shapes.

Now, on the Brother 1034D, I still have no idea what goes in its one holder (maybe the stitch finger?), but I can assure you, my tweezers and screwdriver do not fit. As such, they live in my trim trap for easy access.

The Brother 1034DX is much better suited for convenience in this aspect! 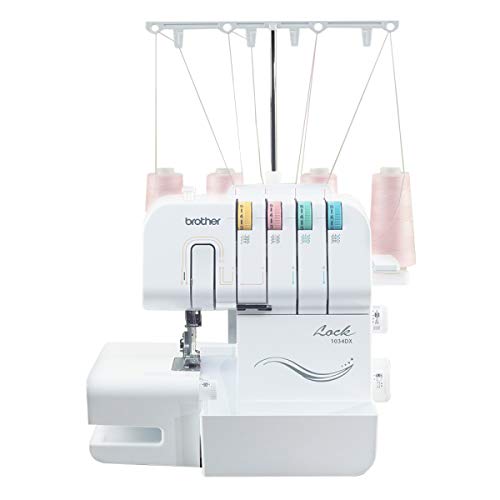 These two sergers have identical functions and similar setups but differ in many small ways such as the location of knobs, trim trap size, and threading order.

Overall, I like the small improvements of the Brother 1034DX serger more and have now made this my preferred serger!