When creating beautiful projects, you can choose from thousands of different machine embroidery threads.

However, what if a new design you plan to stitch lists thread colors in a different brand than the ones you own? How do you find the closest color from within your stash?

While I often visually inspect my embroidery thread stash and pick colors I prefer, some embroidery designs like photo stitches and character designs require particular thread colors. Thus, the need to convert and pick a close substitution.

To help with future conversions (for myself and you!), I’ve found several major embroidery thread color conversion charts and linked them below.

And, if you can’t find the chart you need, I’ve also listed ways to convert thread colors without using charts or online converters.

If you download an embroidery design that gives colors in one thread brand (Floriani, for example), and you want to convert to another brand (like Isacord), there are several ways to go about this.

If you own embroidery software, you can add different thread charts into the software and customize them based on threads you own, for instance.

The digitizing software I’m most comfortable with is Hatch 3, but it’s pricy. For those not interested in design creation but thread conversion, one of my favorite FREE embroidery programs is dime’s Embroidery ToolShed (it even has its own Mac translator).

To convert a design to your thread brand, first, open Embroidery Tool Shed. Then, click “Tools” and “General Options.”

Under the “Environment” tab, choose your default thread palette. (This is the brand you have in your stash and want to convert to.)

Click “OK.” Every design you now load will default to the closest color match in the default palette.

To load an embroidery design, click “File” and “Open.”

If you want to save a design with the new thread colors, “Save As” in the file format type for your design. You can also access the complete list of colors under the “Design Analysis” section under “File.”

Because thread manufacturers sometimes modify the colors and numbers in their thread lines, the charts in your software may not be perfect. If your program allows you to customize charts, you can fix them. If not, just spot-check design colors before exporting.

Printable or PDF embroidery thread color conversion charts are helpful if you frequently convert between different brands. As are online conversion tools.

After this section, I’ve curated the charts from the most popular manufacturers so you can print them and keep them by your embroidery machine.

3. Use Your Embroidery Machine

My Brother Luminaire, for example, allows me to default to Brother, Isacord, Sulky, Robison-Anton, and several other brands of embroidery thread. Check your machine’s manual or manufacturer’s website to see if you have built-in help for thread conversion.

There are many charts linked below, which may look overwhelming. However, I’ve listed the charts alphabetically, prioritizing by the brand you want to convert to. (You can also Ctrl+F to find relevant charts.)

Don’t forget that if you can’t find, for instance, a Sulky to Gutermann thread conversation chart, you can still use a Gutermann to Sulky chart and reverse engineer a bit.

Conversion charts aren’t always perfect because matches are the closest possible color, there may not even be a good close match, and thread numbers can change over time. Also, metallic and variegated threads are difficult to convert.

Lastly, if you are looking simply for charts with numbers and names for threads, check out my master list of machine embroidery thread color charts.

ARC threads are fading from popularity, but you can still find a chart to convert DMC floss to ARC Polyester thanks to RNK Distributing.

If you own a Brother embroidery machine, these thread charts are also likely available within your machine for easy conversion. Brother lists the machines covered by their built-in thread conversion charts for you to check.

Embroidery Online has a helpful conversion chart from Madeira to Dakota.

Sewing Machines Plus also has helpful printable charts to convert between Exquisite and each of the three options:

Fil-Tec’s website hab+dash provides the following charts if you use Glide threads. (I love their bobbin threads!)

WAWAK has a helpful chart to convert between retail and industrial shades of Gutermann threads.

PatternReview.com also has another Gutermann conversion chart with the colors listed to match the retail and wholesale thread number equivalencies.

To convert Isacord to Mettler, Embroidery Online has a chart that lists converting Isacord thread colors to Sulky, Madeira, and Mettler.

You can also use this Robison-Anton to Mettler conversion chart from Red Rock Threads.

Above, I pictured a chart that came with my machine embroidery thread that converts Brothread to Madeira Rayon or Poly numbers.

Polystar thread uses Brother’s (and Baby Lock’s) color numbering scheme, so you can refer to those conversion charts when converting to and from Polystar thread.

All Threads hosts the most impressive Robison-Anton color conversion calculator.

One downfall above is you have to enter thread numbers. If you prefer actual printable conversion charts, you can find the following Robison-Anton color conversion charts from the Thread Exchange.

You can also print these color conversion charts from Red Rock Threads:

And lastly, you can convert DMC to Robison-Anton Polyester (RNK Distributing). 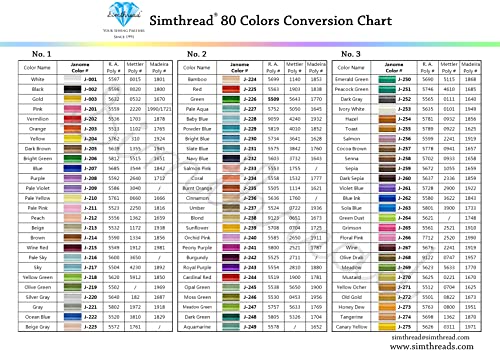 Simthread, one of Amazon’s more popular thread manufacturers, uses all sorts of numbering schemes for their threads.

For the pack I own, they used the Brother numbering scheme. (You’ll know it’s likely Brother if the threads have 001 as white, 800 as red, and 900 as black.)

However, if the color numbers on your threads aren’t only numbers but also have an S or a J before them, Simthread has its color charts and color conversion charts for these sets below:

Use Sulky’s thread conversion reference to convert DMC embroidery floss to Sulky, Floriani to Sulky, Gutermann to Sulky, Hemingworth to Sulky, Isacord to Sulky, Janome to Sulky, Madeira to Sulky, Mettler to Sulky, and Robison-Anton to Sulky.

A printable chart from Red Rock Threads also provides thread equivalencies when converting Robison-Anton to Sulky and Sulky to Robison-Anton.

EmbroideryOnline also has one more chart that converts Isacord to Maderia, Sulky, and Mettler.

Lastly, you can also convert Floriani to Sulky (and also Janome) with this RNK Distributing chart.

Thus, as with Brothread and Simthread, you can use Brother embroidery thread conversion charts to convert to and from ThreadNanny. (If 001 is white, 800 is red, and 900 is black, then that’s the Brother numbering scheme.)

However, if you search in the pictures on the ThreadNanny website, you can find a ThreadNanny to Robison-Anton thread chart.

If you need to convert Isacord to Timeless, Embroidery Online’s chart will help.

I hope you now know how to convert embroidery thread colors from one thread brand to another.

Whether you use software or download embroidery thread color conversion charts, you should now be able to use any threads from your stash!

Lastly, if you have any other conversion resources to share, please let me know!