It wasn’t until I purchased my first sewing and embroidery combo machine that I discovered how amazing having a sewing machine with an automatic thread cutter was.

I will now never buy another sewing machine unless it has built-in thread cutting. No more having small scissors around my neck or using a dulled thread cutter on the side of the machine!

Now, auto thread cutting isn’t a feature on most entry-level sewing machines, so you do have to look to the mid-level or more advanced computerized machines to find this great feature.

Types of Thread Cutters on Machines

Most basic sewing machines have manual thread cutters on the left where you wrap the thread, pull, and trim it.

Here’s a quick description of those two types.

The first type is sewing machines that have a thread cutting button, which is typically a pair of small scissors. When you press this button, the machine automatically trims the top and bottom bobbin threads.

On some machines, you can also depress the heel of your foot controller pedal to cut threads hands-free.

What I think of when someone says automatic thread cutting is a computerized sewing machine that can be programmed to cut threads at the end of seams with no extra user input.

For instance, on my above sewing machine, when I press the scissors button, my machine knows that I want it to lock my seam and then cut stitches every time I press the reverse button to end a seam.

Now, this is a non-exhaustive list. Machines come and go, and manufacturers make multiple versions of each sewing machine.

Make sure to check your local sewing store for more specific options or even pre-loved versions if you don’t like the options below! 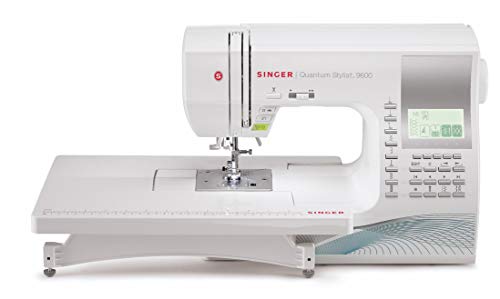 What’s fun about this machine is that it has 5 built-in alphanumeric fonts, so it’s also a sewing machine that can be used for monogramming basic things.

As far as extra goodies go, it has an impressive 13 presser feet included and an extension table for holding larger projects. 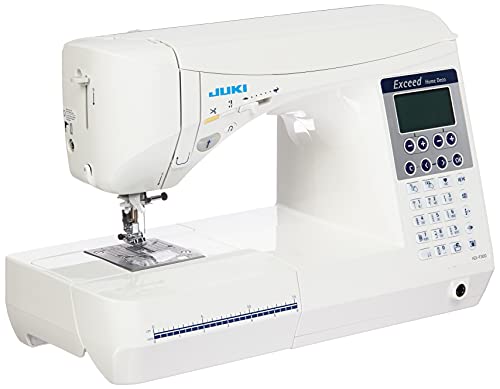 Made by the well-loved Juki brand, the Juki HZL-F300 sewing and quilting machine offers similar automatic features to other sewing machines.

For instance, automatic thread cutting (pedal-controlled is an option) and even a semi-automatic needle threader.

In terms of sewing features, there are 106 stitches as well as three font options. (This is not a computerized embroidery machine that stitches programmed designs. It does work for free-motion embroidery, though.)

It has the option for a knee-lift lever and many compatible accessories that make it great for quilting.

One downfall at this price point is the LCD screen isn’t a touchscreen, and the print on the buttons is small for users with poor vision.

(Within the Juki Exceed Series of machines, the HZL-F400 and HZL-F600, which include more stitches and accessories, also have the same thread trimming properties.) 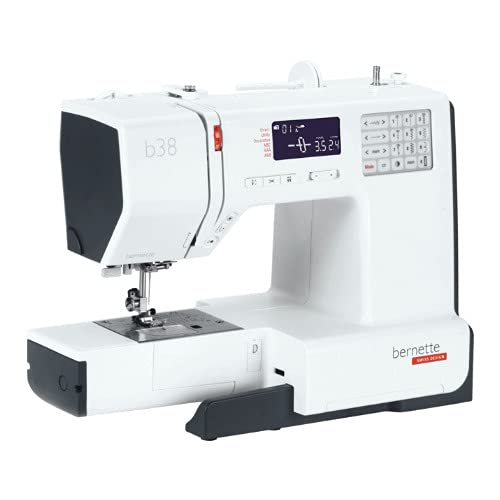 The higher the number following the b, the more features included with the sewing machine.

On the b38, there are fun things like the automatic thread cutter, a speed regulator, an alphabet font, and adjustable presser foot pressure.

There are 8 presser feet included, which can be supplemented by extras, 394 stitch patterns, and a maximum sewing speed of 820 spm.

You can download the comparison between the 30 series models at the end of the page. 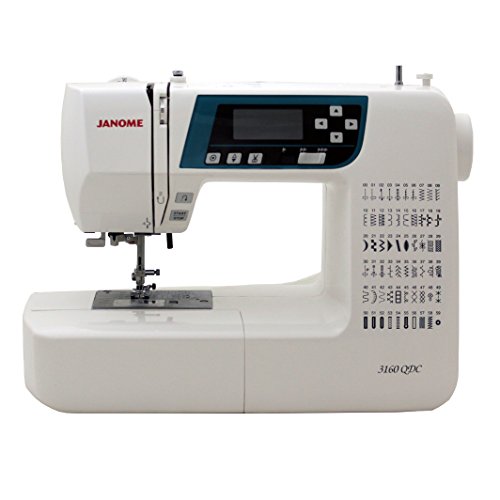 A great Janome sewing machine with an automatic thread trimmer, the 3160QDC is one of the more popular mid-level machines.

It only has 60 stitches (similar to the Brother CS6000i) but has more features like automatic thread trimming and Janome’s Superior Plus Feed System (plus box feeding), which makes this machine handle any fabric well.

One fun thing is the needle plate has angle markings and more measurements than your average sewing machine plate, which helps make precise seams!

If you prefer a more featured machine with auto thread trimming, check out the Janome 5300QDC or the Janome 4120QDC. This chart from Janome’s website explains the differences between the different models.

All current Brother combination machines include an automatic thread cutter when sewing.

A combination machine means that your sewing machine can be converted to also machine embroider computerized embroidery designs.

I own the Brother SE1900 and used to own a Brother SE625 sewing and embroidery combination machine.

Because embroidery machines from Brother are so affordable, these combination machines are sometimes less expensive than dedicated sewing machines from other brands!

In contrast, the Brother SE1900 has a larger embroidery area and includes 240 stitches, 7 presser feet, and a maximum sewing speed of 850 spm. I love how this machine has a knee lifter and can sew side to side also! (Read my SE1900 review to learn all about it.)

These two Brother Pacesetter sewing machines are available for order from a local dealer and have automatic thread cutters.

The Brother PS700 is the more deluxe of the two machines, but both feature Brother’s ease-of-use technology such as the automatic needle threader, quick-set, top-drop bobbin, and easy presser foot pressure adjustment.

They also have the My Custom Stitch feature, which allows you to create unique stitch combinations and save them on your machine for later use.

One of the main differences is while the PS500 includes 100 stitches and 4 alphabets, the Brother PS700 consists of 180 stitches and 5 fonts.

One thing about these Pacesetter machines is unless you get a great deal from your dealer, the SE600 and SE1900 combination machines, which are available at online retailers, pack more bang for your buck if you think you’ll ever want to learn to machine embroider. 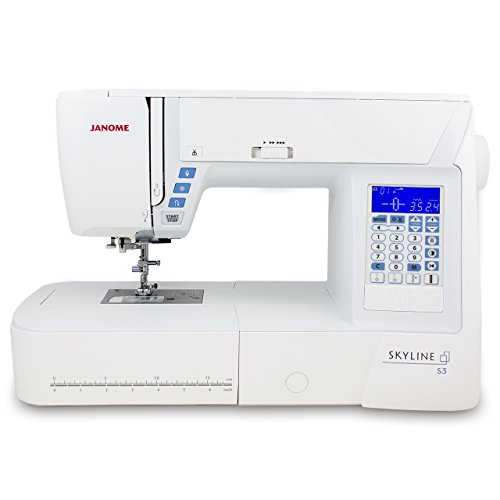 The Janome Skyline S9 is a sewing and embroidery combination machine, but the other machines in the series are only sewing machines.

However, all of the sewing machines have automatic thread cutting by manually pressing a button or through programming after reverse or lock stitches.

The S3 is the least expensive of the machines and includes 120 stitches, one font, 7 presser feet, and 71 different needle positions. However, it only sews at 820 spm.

As the machine number following the S increases, the number of stitches and features also increase.

If you like the look of this series, decide which features are must-haves for you, and then choose between the different machine options. 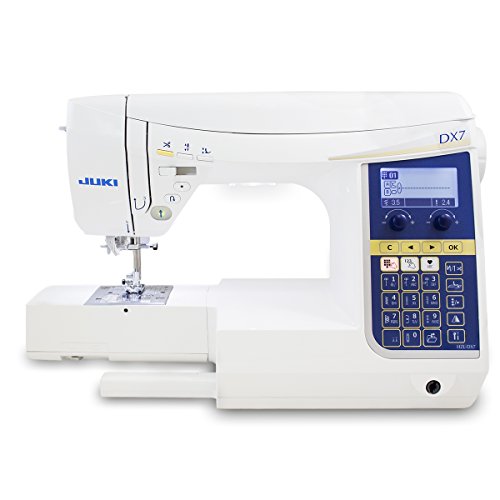 The Juki HZL-DX7 is a sewing and quilting combination machine that includes four monogramming fonts.

With a max speed of 1,050 spm, it’s faster than most standard home sewing machines.

Other features that set it apart include a knee-lift lever and a presser foot pivot option, which raises the presser foot after a seam is sewed.

Also, you can switch from a standard, wide needle hole on the needle plate to a single needle hole with the press of a lever. This is much better than having to unscrew and change out needle plates yourself!

You can also purchase an optional stitch magnifier to magnify the workspace stitch markings 1.4x.

One last fun thing is the “float function,” which lets you sew with the presser foot raised ever so slightly instead of having to adjust presser foot pressure to create more even seams on specific fabrics.

If you prefer, you can set the heel portion of your presser foot to trim threads. (Heel touch can also be set to reverse stitch or lift the presser foot.)

The Juki DX5, a less expensive model in this series, also has automatic thread trimming properties.

The main differences between the DX7 and DX5 are the number of stitches and fonts, an extension table, and the number of LED lights. 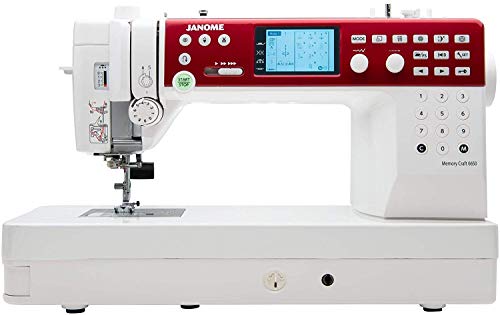 A higher-end Janome sewing machine, the Janome MC6650 features a large 10″ work area and the same superior feed system as the Janome 3160QDC.

It also has auto thread cutting, which can be manually initiated or set to happen automatically after locking stitches.

However, it features more of everything else, including 170 stitches, 9 buttonholes, 12 presser feet, and 91 different needle positions.

Other deluxe features include the ability to change the needle plate in one push, a high stitching speed of 1,000 spm, and a twin needle guard to prevent mistakes from happenings.

And, it can program preferred default stitch settings, so you don’t have to reset the machine each time you turn it on! 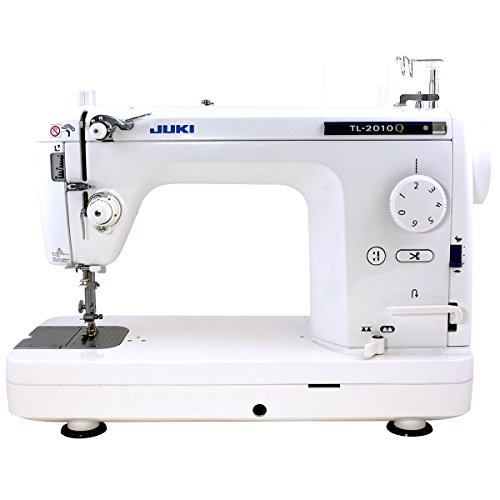 This Juki lockstitch sewing machine only creates straight stitches, so it’s not for everyone.

There is no way to do buttonholes, zigzag stitches, etc., so it’s meant for serious quilters or career sewists looking to stitch straight seams fast.

The Juki TL-2010Q also sews at an impressive 1,500 spm (faster than my sergers!) and is surprisingly portable, considering how it mimics industrial sewing machines. (There is a speed control dial, though, if you’re afraid of that max speed!)

It also has a larger workspace area and larger presser foot maximum height than standard sewing machines so it can better accommodate thick, large quilts.

Thread trimming happens automatically if you press with your heel on the foot pedal or press the button underneath the stitch length dial. You cannot program it to trim without user input. 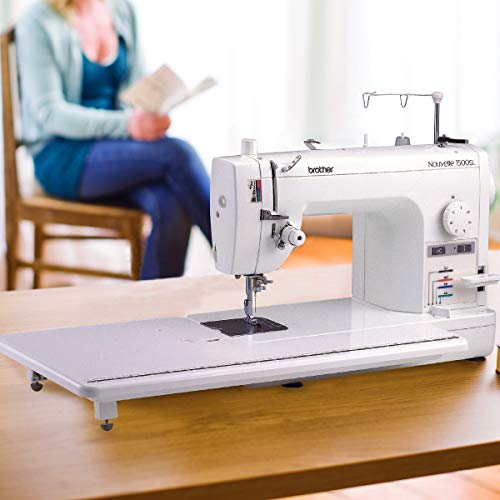 If you’re looking for a straight-stitch-only machine and the Juki TL-2010Q is too expensive, check out the Brother PQ1500SL.

Compared to most other straight-stitch sewing machines, it is less expensive but at the same time, it does not have as many deluxe features.

It also sews at 1,500 spm, though, is a sewing machine with a wide throat space, and has a large extension table to hold bulkier projects.

Like the Juki lockstitch machine, thread cutting cannot be programmed to auto-trim at the end of the threads but is instead engaged when you push the scissors button.

And, that’s the end of my running list of the best sewing machines with automatic thread cutters.

Which do you prefer?