It was tiny, portable, lightweight, and cost a portion of what full-sized sewing machines cost.

I was underwhelmed, and well, let’s just say that it’s not the sewing machine that she ended up learning to sew on.

However, mini sewing machines aren’t all bad, and there’s a small group of people for whom these might be the right sewing machine choice.

I alternated stressfully between options on Amazon before realizing that most of these machines were identical or strikingly similar.

See, I’ll let you in on a little secret: Most of the mini sewing machines on Amazon are from Alibaba, AliExpress, or the equivalent and are “branded” for the United States.

Sure, you might see a slightly different color or the inclusion of different accessories. However, the machines themselves likely all come from the same place: China.

So, Is a Mini Sewing Machine Worth It?

Before getting into this miniature sewing machine review, the short answer is no, not really, for most people.

It’s pretty much a toy sewing machine that won’t grow with you if you ever plan to do more than basic sewing tasks.

The only person I might recommend this for is someone who either wants a small sewing machine that doesn’t require electricity, can’t lift anything heavier for travel, wants to do only the basics, or is on a strict budget.

So, if you, for instance, get stuck in a small space with no power and need to sew something small, your mini sewing machine just might be helpful!

Even if you’re on a super strict budget, though, I recommend waiting until a preowned, inexpensive full-size sewing machine comes available on Facebook Marketplace, Craigslist, GoodWill, or even your local Buy Nothing Group.

So, not everything is horrible about these sewing machines. Some people give them good reviews. (I think it’s because they don’t know any other sewing machines, but that’s just my two cents.)

Either that or for the price they paid, they can overlook several deficits.

Anyway, here’s my list of 7 advantages of mini sewing machines before I move into 7 things that can be improved.

The most significant advantage of miniature sewing machines is their price. At less than $50, they’re roughly half the price of the least expensive full-size sewing machines.

If you’re on a strict budget, this may be the only thing you need to convince you that a mini-sewing machine is suitable for you.

However, you do get what you pay for.

2. No Need For An Outlet

If you don’t have access to an outlet, you can use this miniature sewing machine with only AA batteries–no power cord required!

This is a nice feature and something that almost no modern sewing machines offer these days. 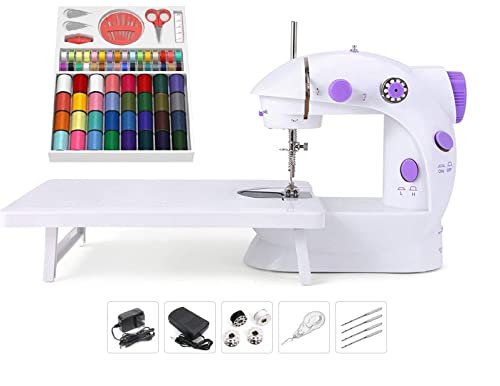 If you play your cards right and search the Amazon options, you’ll likely find several that include a free accessories kit!

My accessories bonus included a slew of threaded bobbins, small thread spools, a needle threader, needles, and other useful sewing supplies. Thanks to this kit, fabric is the only thing you need to get started sewing.

At roughly 3 pounds, this is a small, portable sewing machine. You can pick it up in your palm (and throw it out the window quickly, too, if you get as frustrated with it as I did at times!)

You can also sew small cylindrical items easily, as its workspace is roughly the same size around as a standard sewing machine’s free arm is.

With great smallness comes a great lack of features, though.

Thankfully, mini sewing machines use regular sewing machine needles, so you don’t have to go to the ends of the earth to find a special needle replacement for this machine.

Choose from Schmetz, Organ, or your favorite needle manufacturer when it comes time to replace a dull or broken needle. (Make sure you have a small screwdriver to do so.)

Also, its metal bobbins are easy to find, so you can purchase extras and wind more than just a few colors of thread for your projects.

For its size, this machine stitches quickly, which is excellent if you want to sew long seams (like a curtain hem, for instance).

However, even the slowest speed might be more than you’re initially comfortable with for sewing beginners. (There are two stitch speeds, by the way.)

The foot pedal is hilariously tiny and lightweight. It also has a pretty short cord.

You can use the foot pedal to sew, but you can also use the buttons on the machine face itself if you don’t want to deal with the pedal and its cord. This feature makes the machine even more portable!

7. Better Than a Handheld Sewing Machine

I also have a Singer handheld sewing machine, which is actually more painful to use and sew straight with. It’s less expensive than the KPCB, Varmax, or Magicfly mini sewing machines.

If you’re choosing between mini and handheld, choose the mini!

I’ve owned MANY sewing machines over the years (five right now), so I have several reasons why this compact sewing machine just doesn’t cut in in comparison.

Miniature sewing machines can only do a straight stitch in one stitch length.

What about a simple zigzag stitch? Also nope, which means you can’t do satin or zigzag stitches around appliques or sew stretch fabrics, which require a stretch stitch.

Also, there are no buttonhole stitches, so you can’t add buttonholes to apparel.

Lastly, there is also no reverse stitch lever or button. Thus, if you want to lock stitches (to keep threads from unraveling), you either need to knot them together or use the handwheel on the right of the machine to reverse directions before beginning to sew.

2. No Thick Fabric, Stretch Fabric, or Many Fabrics, Really

Consider what your intended projects are for this sewing machine before purchasing.

Not only does the presser foot not raise high enough for bulky fabrics, but also the little motor in this sewing machine isn’t going to last if you try to sew anything thick like your jeans.

Also, in case it wasn’t already apparent, this sewing machine is not made for sewing stretchy, knit fabric. Or anything too lightweight and sheer (like chiffon), for that matter.

Seriously, stick with good-quality, not-stretchy cotton fabric unless you like to live life on the edge.

The workspace is so, so, so small. It’s a mini sewing machine, I know, but wow!

The attachable extension table does add space to the left of the machine, but trying to roll or wrap any fabric to the right of the sewing machine in the throat space is laughable.

If you have big hands, I feel for you trying to thread that needle in such a small space!

My small sewing machine had several dents and scratches right out of the box, and the foot pedal was a little wonky. The bobbin holder also looked like it was one step from permanently springing off.

The LED light didn’t even turn on more than once, but when it did, it was laughable.

Again, these machines are (almost all, likely) produced in China and are not held to American manufacturing standards and quality control.

5. Big Noise for Something So Small

This might be due to poor quality control for my specific sewing machine, but this thing is pretty loud for how small it is! I expected a gentle hum, but this was more like a miniature jackhammer.

That’s an exaggeration, as it’s not loud enough to wake apartment neighbors or your sleeping baby, but I was still taken aback at the sound it made while stitching away. Much louder than my full-size sewing machines.

Unless your outlet is RIGHT by the sewing machine, it’s a good thing this machine sews with batteries.

I would need an extension cord to use the machine on my sewing desk, and my plug’s only maybe a foot down the wall from where the machine sits.

Because there are so few parts and so few modifications you can make to the machine, it’s difficult to troubleshoot issues like skipped stitches, breaking threads, and thread clumping.

To make matters worse, the machine isn’t made to last, so it’s hard to know when it’s just a cruddy machine vs. when there’s actually a setting you can fix.

My recommendation is if you experience issues, make sure the machine is threaded correctly on top, the bobbin is oriented correctly, and the thread is pulled up correctly before beginning to sew. Feel free to adjust the tension dial, too, but that never helps much with my problems.

Then, use the handwheel on the right of the machine to slow-motion move the needle and eagle eye where any problems occur.

My Mini Sewing Machine In Action

If you want to see more detailed pictures and learn about the process of setting up and using a mini sewing machine, I’ve put together two detailed articles.

The instructions with my mini machine were SO bad; you will likely need additional help to learn to use the machine. There were also no step-by-step pictures in the instructions, and several sections were challenging to understand.

That being said, when setting up the machine, the most frustrating aspect to master is threading the bobbin. 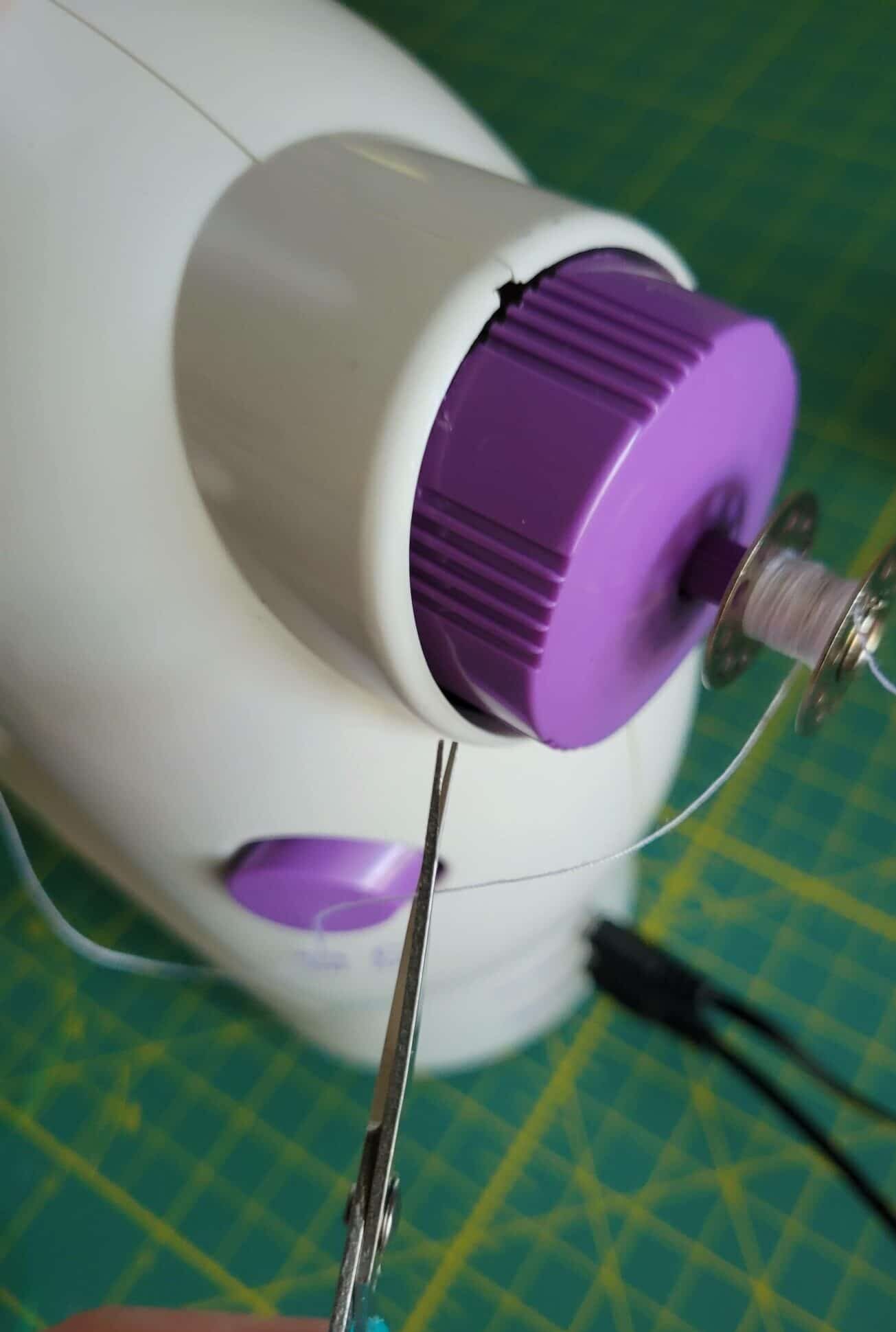 You first have to rotate and pop out the tiny pin in the center of the machine handwheel. Then, you place an empty bobbin on it and act like you’re starting to stitch to get the bobbin to wind.

It’s a clever idea, but it’s almost impossible to understand from the instructions!

The needle is also counterintuitive to thread, as it’s angled, and I’m used to threading needles from front to back, not side to side. Not cool!

If I were stuck on a desert island with no power source, I suppose I’d be happy with the limited features of a battery-powered miniature sewing machine and the fact I could lug it around under my arm.

However, since that’s not the case, I prefer full-sized sewing machines (like the beginner Brother CS7000X or GX37) and recommend those to any users (kids, beginners, even experts, etc.) who ever plan to do more than the very basics.

Because, well, you get what you pay for, and since this sewing machine’s price is pretty low…you get my drift, right?

What are your thoughts?