I had desperately wanted a bigger embroidery machine, and I also wanted to be able to “do Disney” before my girls got too old for the characters. So, I made the splurge and am so happy with my purchase!

Are you, too, looking for an embroidery machine that can stitch Disney designs?

If so, check out the embroidery machines with the most Disney designs for your personal use!

Now, before we get to the machines, it’s important to note that things are complicated regarding the legality of use of Disney embroidery designs.

Brother is the embroidery machine company that Disney uses, and Brother has exclusive rights to Disney embroidery designs.

And, even once you get Disney designs legally, as noted by Brother, you can’t sell items you make with the designs. Disney designs are for personal use only.

Disney has many lawyers, and they’re known for prosecuting. So, if you’re a digitizer, don’t create designs resembling Disney characters, and if you’re an embroidery business owner, never sell anything that remotely resembles anything Disney.

Also, some older embroidery machine models with Disney designs have been discontinued, so I will not list those. (For instance, the Brother SE270D, Brother Quattro NV6700D, Duetta NV4750D, and Dream Machine XV8550D. You can still snag some of these older Disney models pre-loved at a local sewing store, though!)

Also, I’m listing by smallest hoop size to largest hoop size, which correlates with the highest priced machines at the end.

And lastly, I’ve linked to the specific Disney design manual for each machine when possible so you can make sure your favorite characters are included! 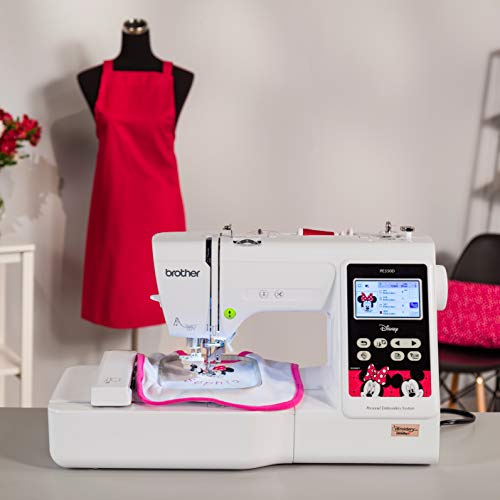 However, I ultimately upgraded to a slightly larger hoop after a year. Don’t worry, though. You can still embroider so many things with a 4″x4″ hoop if you don’t want to start with a larger hoop machine!

Now, the Brother PE550D is an embroidery-only machine, so you need a separate sewing machine if you want to complete any sewing tasks.

In terms of features, there are 125 other built-in embroidery designs and nine embroidery fonts. However, I guarantee you will want more than just these designs.

Thankfully, you can transfer any free or paid embroidery design you find on the internet to the Brother PE550D using a USB drive.

Once designs are transferred, you also have some editing capabilities on the LCD touchscreen—things like resizing, rotating, and changing thread colors. You can also view basic tutorials for machine setup and use on the screen.

The Brother NS1750D has similar embroidery features and built-in designs as the Brother PE550D embroidery-only machine.

However, the NS1750D is a Brother computerized sewing and embroidery machine.

This means you can use the machine to sew garments or make quilts and then switch the presser foot and attach the embroidery arm to embroider.

In terms of sewing features on the Brother NS1750D, you’ll find 181 built-in stitches and 10 buttonholes. Not to mention the inclusion of My Custom Stitch Feature and a maximum sewing speed of 850 spm. (Embroidery is at a slower speed.)

In August 2022, the updated Brother NS1850D was released, with the biggest differences being a wireless design transfer option and 65 Disney designs. 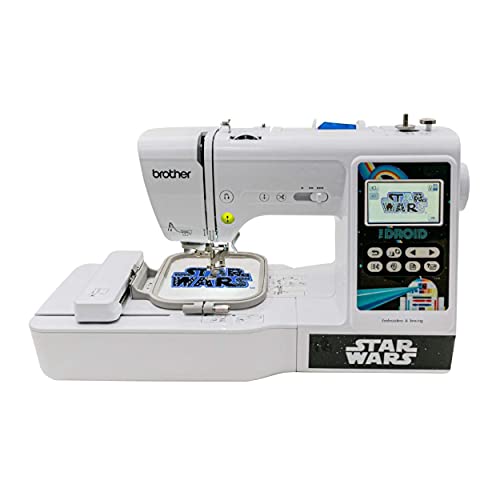 What’s different is the LB5000S includes a Star Wars stickers faceplate pack to jazz it up and access to Star Wars embroidery designs through iBroidery.

Don’t worry if you can’t decide between the two machines; you can download any of these iBroidery designs without the machines. You just have to pay for them.

The Brother NS2750D is the Disney version of the Brother SE1900 sewing and embroidery machine. (Besides the Disney designs, the NS2750D also includes a multipositional 5″x12″ hoop; this has to be purchased separately with the SE1900.)

Overall, the Brother NS2750D is an upgrade to the 4″x4″ machines in that it has a larger 5″x7″ embroidery field and has more sewing features like a knee lifter and the ability to sew sideways.

While this machine has the least number of designs of all the machines listed here, most Brother embroidery machines come with a coupon in the box for at least one free ibroidery.com download when you register your product.

The Brother NS2850D was released in August 2022. It’s a much snazzier machine, including wireless design transfer, 55 Disney embroidery designs, and automatic jump-stitch trimming! 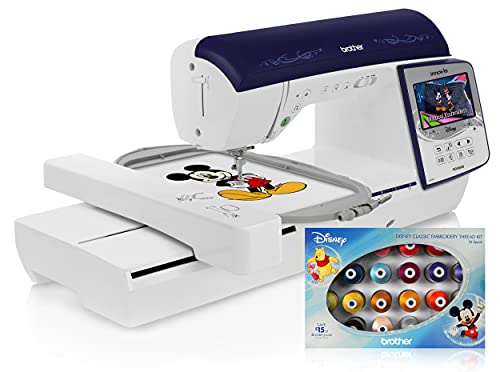 The newer model for the well-loved Brother NQ3600D, the Brother NQ3700D is an excellent mid-level embroidery machine.

It’s a combination sewing and embroidery machine featuring 291 built-in stitches and a wider-than-standard 8.3″ needle-to-arm area for embroiderers who also like to quilt.

You can do everything the smaller hoop machines can do, plus many other things.

It also has wireless file transfer (which is nowhere near as all-encompassing as I thought when I finally got a machine with this capability.)

And, the NQ3700D can work with dime Monster Magnetic Snap Hoops, which I love! It also has a higher max embroidery speed than the two lower models so you can complete larger designs in quicker times.

The Brother Stellaire XE1 is an embroidery-only machine, whereas the Stellaire XJ1 is the sewing and embroidery combination machine that includes hundreds of sewing stitches and other fun sewing features.

These two machines are the same in terms of Disney designs and embroidery features.

One of my favorite things is the drool-worthy 11.25″ workspace that’s perfect for free-motion quilters or in-the-hoop quilters who don’t have access to a longarm quilting machine.

One downfall for embroiderers who don’t live near sewing shops is this machine is almost only sold in-store by authorized retailers.

The Brother Luminaire XP2 cost me a small fortune, but I love that it’s the most advanced and largest Brother embroidery machine on the market right now and thus offers me the most creative potential.

In addition to the enormous max hoop size, what sets the Luminaire apart is all its built-in embroidery editing and design features. The screen is like a mini-iPad and even comes with a stylus.

I also love that the Luminaire XP2 embroidery machine works wirelessly with Disney Innov-is Brother ScanNCut cutting machines, which are loaded with Disney cutting designs. (I have the SDX330D model.)

In addition to the 192 Disney embroidery designs, there are also 10 Disney utility embroidery patterns created when using the XP2 as a sewing machine. These stitches say things like “Minnie Mouse,” “Mickey Mouse,” and even showcase mouse ears and Cinderella slippers. So cute!

Brother released the Brother XP3 in August 2022. I’ve yet to receive my upgrade package to confirm, but my understanding is the XP3 and XP2 have the same number of Disney patterns.